Experts and lay people will debate in the studio while viewers at home can comment via fax and e-mail. There is also an online Questionnaire (in Japanese).

Do let them know what you think!

One topic that is a big issue is Japan's low food self-sufficiency rate. The graph below is from NHK's website (I translated the names of the countries). 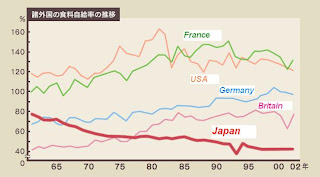 Update: Philip Brasor, media critic at The Japan Times, didn't like the program very much:

The program mentioned a possible Free Trade Agreement with Australia, under which Japanese farmers would lose an estimated ¥800 billion a year, 75 percent of it in the form of rice. However, the country's GDP would rise by ¥650 billion because of the steel and automobiles it would sell to Australia in exchange.

Voting from home, viewers didn't seem to think it was a fair trade. To the question, "Should Japan open its markets to foreign foods?" five times as many viewers said "no" as "yes." And the number who said, "Only the rice market shouldn't be opened" was three times the number who said "yes."