Consumers are concerned about BSE 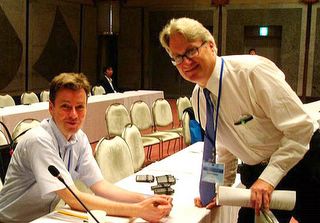 Reuters and other news bureaus have several stories today about mad cow (BSE) and the new proposed feed rules in the US. I recently met Mike Hansen from Consumers Union in the US, and he is very concerned about the lack of controls in the US cattle industry.

"We shouldn’t wait for a major outbreak of mad cow disease to take preventive action. There is no question that we should not be feeding the remains of any mammals to food animals, and by not closing this dangerous loophole, we are exposing the American public to unnecessary risk," says Michael Hansen, Ph.D., a biologist with Consumers Union.

"The United Kingdom took many halfway steps in their efforts to eliminate mad cow disease and failed to stop it. Only when the UK stopped feeding all mammal material to any food animal, did they succeed in getting the number of mad cow cases down to less than ten a year," adds Hansen.

The United States has identified two cases of mad cow disease, one in a cow imported from Canada, and the second in a cow that lived its whole life in Texas. Five cases have been identified in Canada. The US reopened its border to Canadian beef and live animals under 30 months of age in July 2005.

"Thirty months is not a magic safe number," says Michael Hansen. "In Japan, two of the twenty cases of mad cow disease that they have identified were under 30 months. We have such a small surveillance program in the United States—only 1 percent of cows are tested at slaughter, and the USDA is talking about cutting that back tenfold—that an infected animal could easily slip through and get into the food or feed chain. Once there, one infected animal could infect thousands of others."