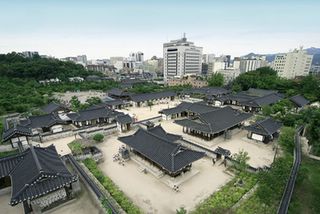 Hanok houses are traditional Korean homes, made from wood, paper and other natural materials. They are often introduced on Korean websites and in guidebooks in glowing terms, describing their beauty, silence and harmony as quintessentially Korean.

So I was really interested in an article today that describes a 62-year-old Englishman and his Korean wife, who are leading a struggle to save Seoul's last district of traditional homes:

David Kilburn and his wife Jade, owners of a traditional "hanok" in the district of Kahoi-dong, say government policies and land speculators have converged to threaten the district that has the feel of Seoul of 100 years ago.

Kilburn, a tea merchant and former journalist, says he isn't by nature a social activist but was pushed into it as his neighbor rebuilt and expanded his hanok, causing damage to Kilburn's home and encroaching on his property.

"The more we investigated the situation to save our own home, the more we realized that the whole district is in danger because of government policies and land speculators," he said.

Read the whole story about their fascinating battle here.

For more information about Kilburn's campaign to save the traditional houses, visit his Web site.
architecture

David Kilburn said…
Dear Martin,
Your photo is of a former Royal palace, Kahoi-dong, and many hanok villages look a little more like
http://www.kahoidong.com/house_of_choi.pdf
go to page 2.

Thanks for your interest
David Kilburn
hanok@kahoidong.com
1:38 am, October 13, 2005