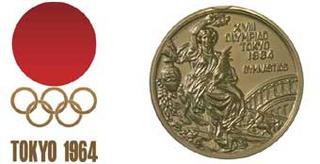 Tonight, NHK's program series called "Project X" deals with Judo as an Olympic sport. I love the images from Tokyo Olympics in 1964. I work right next to the Olympic Stadium, designed by architecht Kenzo Tange, and it is a truly great monument.

Ian Buruma has described the open weight Judo contest in the 1964 Olympics. The Japanese expected their Judo champion, Kaminaga Akio to win against his huge Dutch opponent, Anton Geesink. Such a victory would have signaled the "superiority of Japanese culture, of the Japanese spirit". But, Geesink won. The Japanese around the mat actually cried... "Once again, Japanese manhood had put to the test against superior Western manhood, and once again it was found wanting". But the humiliation subsided when Geesink showed the proper respect by bowing the traditional bow. "Geesink... would be treated as a hero in Japan forever after... One quality has stood out to serve Japan better than any other: the grace to make the best of defeat".

Actually, Japan won the three other gold medals in judo that year. The NHK program ends with a look at Kaminaga-san's career since 1964, as an ordinary salariman in an ordinary company. Another Japanese, Haruki Uemura, finally won the open weight title in the Montreal Olympics 1976. Great photos from 1964 here.