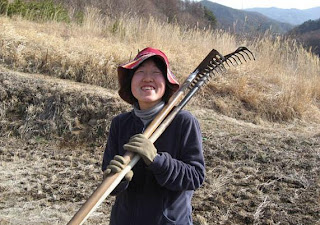 Farming in Japan is as old as the country itself, with rice paddies and veggies and tea and sake as ancient as the shrines and temples. Yet, recently, global WTO agreements and Tokyo-based free-trade import rules have made it difficult for young people to take over farms and make a living.

Foreign media noted some of these stories, and I am impressed. The stories are about people in rural Japan who have succeeded, in spite of the odds.

I try to buy local foods as much as possible. Supporting the farmers where I live is so important. Read the labels before you put anything in your grocery store bag, or make that your マイバグ (my bag)!

Here are a few examples: 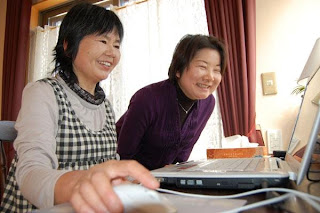 “I never expected to do this,” she says.

The Guardian (UK):
The Rise Of Japanese Rice-Field Art

Ancient and modern, folk and sophisticated, they draw on Japan's traditions of heroic iconography and iconic landscape art. A reproduction in rice of Hokusai's famous print The Great Wave is especially dazzling. Just as crop circles have become a modern folk tradition, so will these images blossom.

For Young Japanese, It’s Back to the Farm
Many young Japanese, for their part, have shown a growing interest in farming as disillusionment rises over the grind of city jobs and layoffs. Agricultural job fairs have been swamped with hundreds of applicants; one in Osaka attracted 1,400 people.

"I know it's a hard life" compared with his former job as a bookkeeper, Mr. Oshima said. "But I want to become a farmer and use my own hands to do everything, from sowing seeds to shipping boxes." He hopes to soon rent land nearby to start farming full time. As the global financial crisis sinks Japan into its worst recession since World War II and hundreds of thousands of jobs are slashed in factories and offices, farming has emerged as a promising new career track. "Agriculture Will Save Japan," blared a headline for a business weekly magazine.

Singer Shiho Fujita is the leader of a squad of young women farmers. She started a marketing business at just 19 years of age, targeting the city’s young girls. Eventually this young entrepreneur came to join various campaigns about environmental and food problems, which led her to venture into a new field — farming.

“Young people, including me in the past, don’t have a clear picture about agriculture in general and the food problems we face,” she says.

“That’s what I want to change.”


Then, of course, there is the Ringo Musume campaign, the Apple Maidens (りんご娘: ringo musume, literally “apple daughters”) in Aomori prefecture. 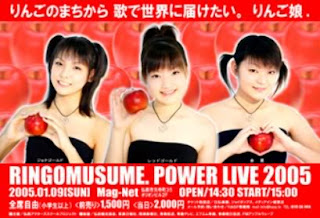 Read more about apple farming at the UN University website:

Apples have feelings too: A tale of pesticide-freedom

I was enjoying Mr Akinori Kimura's lecture yesterday in Saitama. He was very clear about the value of speaking to the apple trees. If you talk to the trees, they will grow and become at least 40 cm wide, he said. And if you don't they just remain at around 2o cm. He noted that the same applies to vegetables: 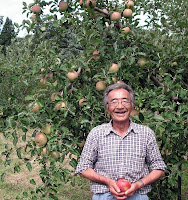 The 57-year-old Kimura recounts how after leaving high school he joined a company in Tokyo but returned to Hirosaki, his hometown in Aomori Prefecture, after three years to marry and take up apple farming.

Restricted from using pesticides and chemical fertilizers on their land because of severe reactions they caused on his wife's skin, Kimura gradually reduced his reliance on the artificial farming aids with the goal of phasing them out completely in a matter of years.

This video is from NHK's program Professionals, a nice interview with Kimura-san. It is only in Japanese, no subtitles:

Martin J Frid said…
K&S, thanks a lot for the comment and your inspiration.

Martin J Frid said…
Sounds like a good plan. I wish more people would try herbs like basil or rosemary (the fragrance is so good!) or cherry tomatoes.
12:41 am, January 26, 2010

K and S said…
I actually have rosemary on my lanai year-round, basil and italian parsley tend to freeze during the winter, so I usually try to replant when the weather warms up. I also have some tiny strawberries, only the size of peas.
7:57 am, January 26, 2010

This blog keeps getting better and better. Fantastic food for thought.

If you'll forgive me a moment of self-promotion, I'd like to link to an article I wrote on this topic last summer. Happily, this piece is due to be reprinted in an upcoming issue of Kyoto Journal whose theme will be sustainability.