September 22, 2007
Why is Time Magazine comparing Japan to Bangladesh and the Philippines when it introduces Taro Aso and Yasuo Fukuda to its American readers?

Is this version of Family Affair unfolding in Bangladesh or the Philippines? Think again. It's Japan, long held up as the paragon of a mature Asian democracy, yet which continues to serve up political leaders distinguishable only by subtleties of grey in their ideological coloration.

Hmm, remind me, isn't the current U.S. president the son of a former U.S. president, who like his son sent U.S. soldiers to war for oil in the Middle East? And his grandfather, Prescott Bush, was deeply invovled with Nazi Germany through his banking business. "Yup, another scion of a political dynasty." Hmmmm, so in what way is Japan similar to Bangladesh and the Philippines, while the U.S. political system is so different? Hmmmmm!

The Guardian: How Bush's grandfather helped Hitler's rise to power 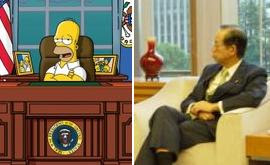 Much more interesting day-by-day analysis about Japanese politics can be found over at the Asia Exile Blog: Man of the moment, comparing Yasuo Fukuda to Homer Simpson, and also noting that for 17 years Fukuda served as a conventional Japanese salaryman in a oil company.