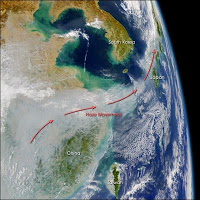 Warnings for high levels of hazardous smog have been issued in a record 28 prefectures so far this year, from sparsely populated isles in southern Japan to Niigata, western Japan, where 350 people have suffered stinging eyes and throats.

While the government is cautious about placing blame, experts say much of the rise in pollution is coming from China.

If you live in big cities, you are problably familiar with this type of smog, called "photochemical smog" because it is created when sunlight reacts with car exhaust and factory fumes (as well as older garbage incinerators). Such particles can cause breathing difficulties and headaches. An increasing number of children are suffering from bronchial asthma in Japan. Studies say the number of cases has increased sixfold in the past 30 years.

(Graphic of "haze movement" from Japundit)

Update: The air pollution is considered so bad in Beijing, that US athletes will be based in South Korea and UK athletes in Macau, to avoid exposure during the 2008 Olympics.

Pandabonium said…
While China's pollution is clearly on the rise, I am skeptical of efforts to point fingers at them, especially when there are obvious signs of Japanese produced pollution (not just smog but plastics on east coast beaches and other things).

Living about 100 km to the east of Tokyo, I sometimes see the brown "haze" come from that direction and surround my location. I seriously doubt it is from China. It reminds me all too much of the smog in Los Angeles California some 35 years ago that prompted me to move to Hawaii.

I have no doubt that China is running amok in the air pollution arena, but let's not allow local polluters to hide behind that fact.
7:24 pm, September 04, 2007

Martin J Frid said…
I agree that all the blame cannot be placed on Chinese pollution, but frankly the air in Tokyo is a lot better than in most European cities today. "More studies are needed" as the scientists always say...
10:03 pm, September 04, 2007

Pandabonium said…
I should give the mayor (right wing wacko that he is) credit for having tightened pollution controls of trucks in Tokyo. It really has made a difference.
6:51 pm, September 05, 2007

Martin J Frid said…
Not only Tokyo, but also the prefectures surrounding Tokyo have signed up, so you got Chiba, Saitama, and Kanagawa (some 30 million people) actually breathing fairly decent air - for a big population center. I'd like to see London or Paris do the same!
8:34 pm, September 05, 2007

vegetablej said…
Yah, when are we going to get that in the countryside, I'd like to know? The air out here is horrible; everyone and their dog has two cars and drives them down the street for 2 blocks and then leaves them idling outside the conbenie while they go in and buy junk food, in wrappers and cans, which they throw into the rivers.:(
12:09 pm, September 12, 2007