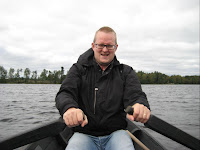 Here is my younger brother Johan showing off again, yes, yes, nice rowing technique. Actually I (kind of) helped grandfather build that oak boat, a very long time ago on a summer holiday - I can't even remember the year now.

Örsjön is a lake on the rugged border between the Skåne and Småland provinces in southern Sweden.

Skåne used to be part of Denmark, but a war of aggression some 350 years ago solved that little problem. In southern Sweden, we still speak Swedish in a funny dialect (i.e. much more sophisticated, continental European). And my brother, who has a Ph.D. and teaches at Lund University, would be able to tell you a lot more (preferably if you buy him a stout or why not a nice lager). I am very proud of him.

And here is Jens, my nephew, who must be about 4 years old now! Call me anytime! Örsjön, near Osby, is an area where people speak even more original dialects:

(Transl: A man from the eastern part of our town had gone on a visit to Stockholm. When he returned, his neighbour asked about his trip and what he thought about the Swedish capital. Well, the traveller replied, it was allright, but that darn city is really in the middle of nowhere!)
Sweden