Waiting for the "real" IAEA report 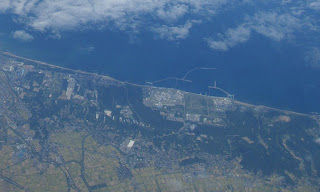 Remember the earthquake on 16 July that seriously shook the World's largest nuclear reactor? Now, Japanese NGOs are calling for greater accountability from the International Atomic Energy Agency (IAEA). They are also demanding that Tokyo Electric Power Company (TEPCO) improve its transparency surrounding the impact of the July Chuetsu-Oki Earthquake on the Kashiwazaki-Kariwa Nuclear Power Plant in Nagano Prefecture:

In a letter to the IAEA and TEPCO, Citizens’ Nuclear Information Center, Green Action, and Greenpeace Japan criticized the IAEA Expert Mission to the Kashiwazaki-Kariwa nuclear power plant for making misleading statements about the impact of the earthquake on the plant1. They also criticized Philippe Jamet, head of the Expert Mission, for saying it would take "months or a year" to put the plant back into operation, even though a careful reading of the Expert Mission’s 17 August 2007 report shows that there are strong grounds for believing that the plant can never be operated again.

I was surprised to learn from the NGOs that the UN inspectors never actually went inside the nuclear plants, yet there were all kinds of reassuring statements about the safety. So, if the IAEA inspectors didn't actually inspect, what did they do?

IAEA's website is not very helpful. The entry made on 14 Aug notes that "significant work, such as detailed examination of the reactor vessels, cores and fuel elements, has still to be performed." And on 17 Aug, IAEA issued its "Preliminary" (pdf) report. Indeed, the report notes that:

"...important components like the reactor vessels, the core internals and the fuel elements have not yet been examined and in-depth inspections are still to be performed."

Ouch. What has been done since then, almost one month ago? I do not understand how anyone can make any claims about safety at this "preliminary" stage.

(Photo: Aerial view of the 7 Kashiwazaki-Kariwa nuclear reactors and their surroundings, from Wikipedia)