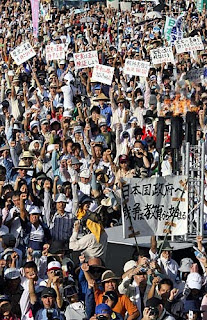 Yomiuri Shinbun reports that 110,000 people in Okinawa, southern Japan, participated in the peaceful demonstration this weekend. They rallied against the Education Ministry's order to modify school textbooks describing how Japan's Imperial Army forced civilians to commit mass suicide at the end of World War II. It is the biggest demonstration since the island was returned to Japan by the United States in 1972, Kyodo News agency said.

Barbro Kalla said…
My heart is laughing when I hear that all this people are protesting.
2:31 am, October 01, 2007