Solar-cells in the news 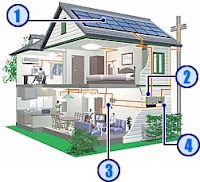 Asahi has an interesting article about the current state of affairs with regards to solar cells. The newspaper notes that Sharp Corp. plans to spend up to 200 billion yen on a factory for thin-film solar cells that will have an annual output equivalent to 1,000 megawatts of power generation capacity, or about half the world's total solar-cell production:

The world's top solar-cell producer is banking on thin-film cells, which use significantly less silicon to make than conventional crystalline cells, as a way to get around the shortage.

Sharp's solar-cell production in 2006 grew only 1 percent year on year because of fierce competition for silicon, according to U.S. industry newsletter PV News.

The price of silicon has nearly quadrupled in the last two years in part because of increased demand for solar cells fanned by growing environmental awareness. Demand has been particularly strong in Europe.

Solar-cell production has increased 30 percent to 40 percent annually since 2001, when a large number of solar panels began being installed on houses and other large facilities.

I wish I could afford to buy a panel or two for my small house - with temperatures still around 30 degrees, I think I should be able to store some power for the winter. Of course, then I'd need some good batteries too... At what point will this make economically sense to small energy users and households?

Pandabonium said…
At what point will this make economically sense to small energy users and households?

Around the time the blackouts start? For remote sites, it makes economic sense now. For cities in industrialized countries it may be some years off, but the longer we wait the harder it will be later because of the amount of time needed to manufacture the huge number of panels needed. Free markets require time to work, so they don't serve well when a wide based crisis occurs.

This story is great news, but keep in mind that renewables account for less that 1% of global energy productions, so even if PV production increases at a high rate (say 40% per year) in 10 years it will still be a small fraction of the overall energy use in the world - China and India demand for energy continues apace, and the world population continues to climb.